As fluid flows through a piping system, where pipes rise and fall, changing elevation, the pressure at a particular point in a pipe is also affected by the changes in elevation of the fluid that have occured.

For example, consider a single vertical pipe where the fluid is flowing upwards, gaining elevation height as it goes. The weight of fluid acting 'on top' of the fluid at a point in the pipe reduces as we consider points higher up the pipe, since there is less fluid above it. Therefore there is a loss of pressure in the pipe as the fluid rises.

Flow through Multiple Changes of Elevation

The Energy Grade Line, also called the Energy Line (EL), is a plot of the Bernoulli equation or the sum of three terms in the work-energy equation. The EL is equal to the sum of the fluid's velocity head, the pressure, and the elevation head.

A pitot tube can be inserted into a pipe such that the fluid initially flows into the tip of the tube, until the height of fluid in the tube balances the energy coming in, at which point the flow in to the tube stops and the fluid velocity at the very tip of the pitot tube becomes zero. The pressure and the velocity head of the fluid are in effect converted to the equivalent head in height of fluid (i.e. the fluid will rise to the elevation of the EL for that specific point in the flow).

The Hydraulic Gradeline (HGL), is the sum of the pressure and elevation heads. This sum is known as the piezometric head and can be measured by inserting a piezometer tube into the side of a pipe so that it is flush with the edge of the pipe.

The HGL and EL of flow in a pipe can be illustrated on a diagram, with the pipe drawn at an angle and the associated elevation, pressure, and velocity heads marked up on the vertical axis at each end of the pipe. The resulting HGL and EL lines can then be drawn between specific points on each vertical axis to give a good visualisation of how these change for fluid flow at different points along the pipe. 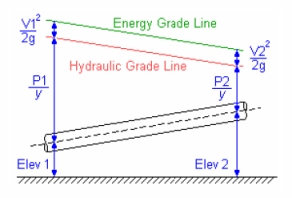